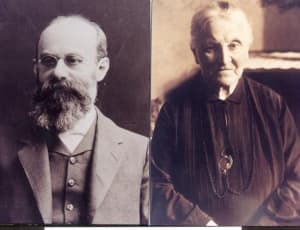 Isidor Brenson (1854-1928), an orthopedic doctor, had a private practice in Riga. He compiled and published three volumes of a biographical dictionary of the doctors of Courland, Livland (regions of Latvia), and Estland (Estonia). Klara Hertzenberg (1859-1939) was his wife. His memoir, written in German, is being translated into Latvian for Riga’s Museum of the History of Medicine.

Klara’s father, Robert Herzenberg, was born in Piltene, later lived in Mitau in Courland (then a part of the tsarist empire; later it became the Latvian city Jelgava). He started a textile firm in Mitau/Jelgava, and his four grandchildren (Ruth, Ellen, Theo, Robby) grew up there.