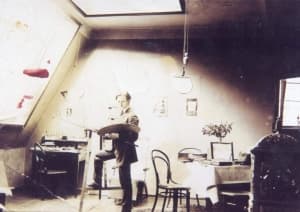 born in 1884, died September 27, 1948 in a Soviet forced labor camp at Cherven, Belarus (near Minsk). Professional artist. Davis’ wife, Raisa, a staunch Trotskyist, was imprisoned by the Soviets for one month in 1924. Davis worked first for Mosfilm (the Moscow Film Studio). In 1925, Davis was sent on a business trip to the film studio Ufa in Berlin. Despite having a Soviet passport, he decided not to return to the Soviet Union. He stayed in Berlin and worked for the Ufa. He survived WWII in Berlin because his German friends hid him in the eastern part of Berlin, while his wife was hidden in the western part of the city. After the Soviets took charge of the eastern section (renamed East Berlin), Davis was arrested by the Soviets and accused of having “survived” the war while remaining (on paper) a Soviet citizen. (A Soviet citizen was not supposed to have survived the war in Berlin, whether or not he had spent that time in hiding). At that time and place this was enough to be accused of treason to the Soviet motherland. Davis was sent to a Soviet concentration camp (“a corrective forced labor camp”) in Belarus, where he perished.

While in the camp, and ill from cold and malnutrition, Davis wrote a letter to his brother-in-law, Lozovsky (1.)(2.), asking him to send a blanket and some warm clothes. Lozovsky didn’t send these things, but he told Davis’s niece, Mael, about the letter. Until Stalin’s death, even speaking to one relative about another relative dying of cold in a camp meant putting one’s own life in danger. In 1953 Mael told Leonid Kossman about the letter from Davis. Leonid wanted to send a blanket and warm clothes to Davis. Since he didn’t know the name or address of the camp, he wrote to the KGB asking where to mail these things. In reply, the KGB informed him that Davis had died in the camp some five years before.

*Davis’ wife Raisa, having been hidden in West Berlin, was free to leave West Germany when the Americans came.

*Lozovsky (1.)(2.), director of SovInformBureau, was executed in 1952, in one of the attacks of Stalin’s murderous paranoia.

*Mael (the name comes from “Ma(rx)/E(ngels/ L(enin)”)–daughter of Lyolya (Karolla), Leonid Kossman’s cousin. Her parents sent her to study in a Jesuit school. When she was about 18, she entered the Communist party, was arrested in the 1930’s and spent many years in a Soviet concentration camp simply for being a sister of Nikolai Basekhis, Moscow correspondent of the Austrian paper Neue Freye Presse, who was the first to write about the fake trials under Stalin. Nikolai was forced to leave the USSR in 1938. While in Paris, he wrote “Uncle Joe,” a book about Stalin which was translated into many languages. While still in the Soviet Union, Nikolai often met with brother Zhenia, which is why Zhenia was arrested and executed by the regime. Nikolai’s sister Lyolya remained a staunch Communist despite the many years she spent in the GULAG. His brother Fred was also arrested and spent over a decade in the camps. After his release Fred became a very well-known theatre critic.